In June, Nvidia released several new GPUs including the RTX 3080 Ti. This high-end GPU uses the same GA102 core as the RTX 3090 and RTX 3080 that bracket it, as well as 12GB of GDDR6X VRAM. This GPU offers an absolutely top draw experience but can it possibly justify the price tag?

In this review, we’ve pitted it against the RTX 3080 and the AMD RX 6800 XT, as well as the top tier last-generation Nvidia card the RTX 2080 Ti to find out what it offers.

Looking at the key specification we can see how closely the RTX 3080 Ti matches the RTX 3090. The principal difference is the halving of VRAM capacity, from 24GB to 12GB. This is still ample for gaming, but reduces the cost of parts significantly with the Micron/Nvidia exclusive GDDR6X costing around 100$ per 10GB, and also the power draw with VRAM power consumption topping 100W in the RTX 3090. It uses the same 384-bit bus providing very high bandwidth access to VRAM and this is the real reason for the slight increase to 12GB over the 3080’s 10GB: The wider bus requires 12GB of VRAM or multiples of that.

The core itself loses just 256 of over 10,000 shader units vs the RTX 3090, and 8 Tensor cores and two RTX cores. This is a near-identical specification to the RTX 3090 which indicates that it should perform very similarly too.

Of the other important specifications, we can’t compare ‘Shader units’ across the AMD card or the last generation RTX 2080ti as they’re different architectures, and the same goes for Ray Tracing cores. The RX 6800XT posts impressive theoretical fill rates, but from testing we know it matches the RTX 3080 incredibly closely in rasterised gaming performance.

Finally, we come to pricing, and this is really where the controversy lies. The RTX 3090 was criticised for being too expensive at $1500, and not worth it for gaming where the 24GB VRAM went unused. Then of course everything went crazy, and the 3090 became a veritable money-printing machine thanks to its Ethereum mining capability.

$1500 doesn’t sound so bad when a card can earn $10 a day, but then of course prices rose to account for that with cards at well over $2,000 at retail and the second-hand market.

The RTX 3080 Ti launched at a nominal $1199 price point, but retail immediately saw that climb past $1500 except for the very few founder edition cards where retailers were bound to honour Nvidia’s pricing. So what we’re looking at here is a card that is retailing at around $1500 at this time. And, they’re all ‘Low hash Rate cards’ so you can’t mine as efficiently during downtime to recoup some of the cost.

You can make a persuasive argument that no ‘gaming’ GPU is worth that, but that’s something we’ll consider after looking at the benchmark results.

We’ve divided the benchmarks up game by game, and run all resolutions so you can focus in on what’s most relevant to you. We’ll highlight at this point that none of the cards in this test should be run at 1080p, it’s simply a waste of their potential, but the numbers are there anyway.

We’ve maintained the same test bench of a Ryzen 5800X, B550 Motherboard, and 16GB of 3600MHZ CL16 RAM with infinity fabric and memory clock set 1:1. We ran a Fractal Designs Ion Platinum 860W Power supply to ensure adequate power. This is a high performance system with the 5800X the equal of any CPU available right now in terms of gaming performance. It’s optimised with good RAM speed, but not overclocked beyond PBO being enabled.

We want this test bench to represent the kind of system this GPU would actually be used with. In keeping with this, we run games at representative ‘high to ultra’ settings to show the kind of performance you can actually expect in-game. Simply cranking all settings to ultra often misrepresents a GPUs actual performance, through overburdening either it or the CPU with settings that haven’t been optimised and trash performance for little visual gain. 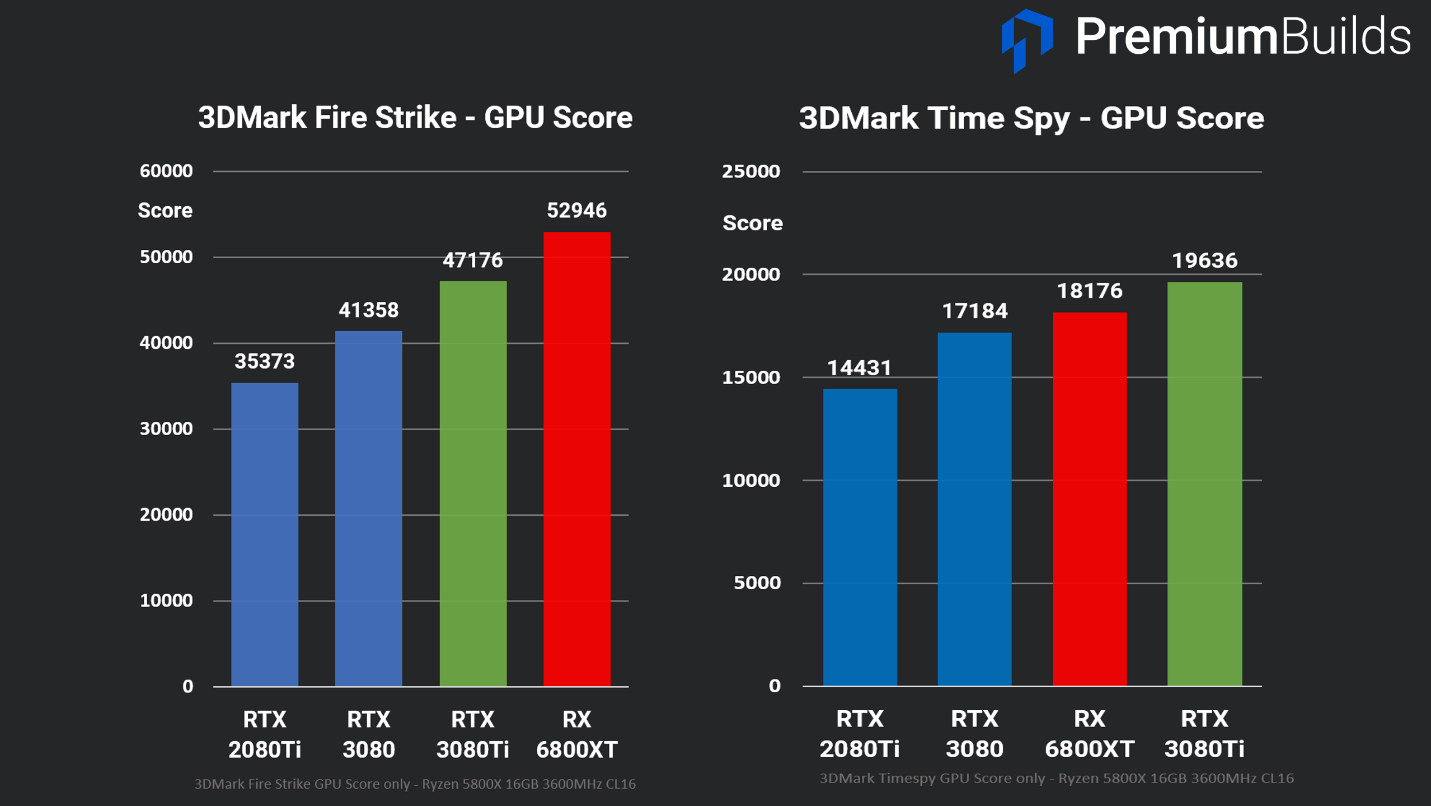 Warzone is first up. This is tested by running a five-minute battle royale against Bots, and logging metrics. The recent update knocked performance back about 15% across the board, and I’ve had to omit the RX 6800 XT as we no longer have it available for testing – it performed near identically to the RTX 3080 so please take that as a proxy. 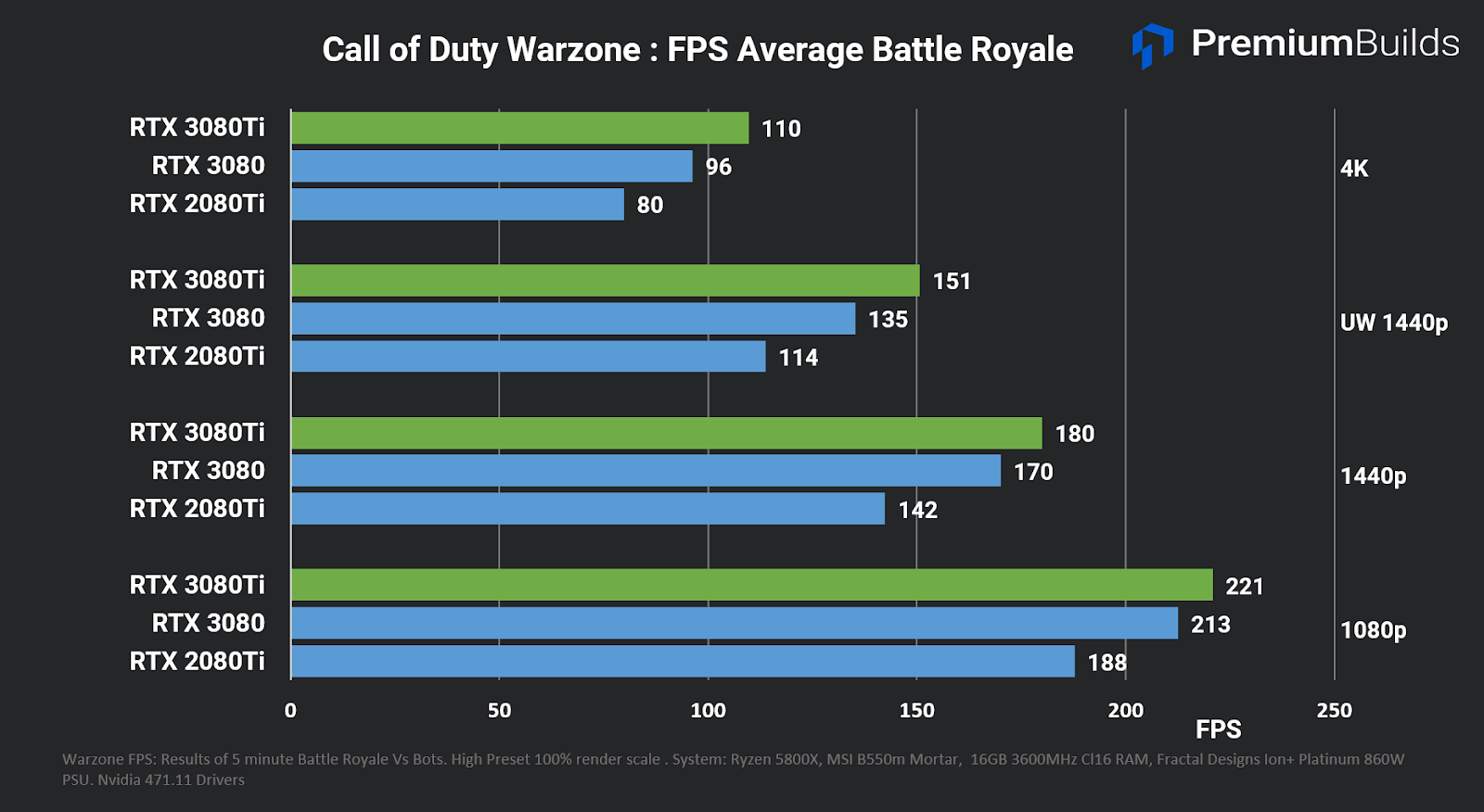 Warzone proves itself a stern test of both CPU and GPU, and can’t generate very high FPS as some other shooters can. The 3080 Ti only marginally outperforms the 3080 at 1080p, Scoring 221 FPS average to 213FPS. At 1440p again there’s only a 10 FPS difference, 180 FPS to 170FPS which isn’t in keeping with the on-paper specification difference. At Ultrawide 1440p we see a little wider gap, proportionally, with a 16 FPS difference. You can see the RTX 2080Ti is 30FPS behind throughout. And finally, at 4K we see the RTX 3080 Ti post just over 100FPS at 110, whilst the 3080 make 96FPS. Overall in Warzone, we don’t see a performance gap commensurate with either specification or Pricing of these GPUs. 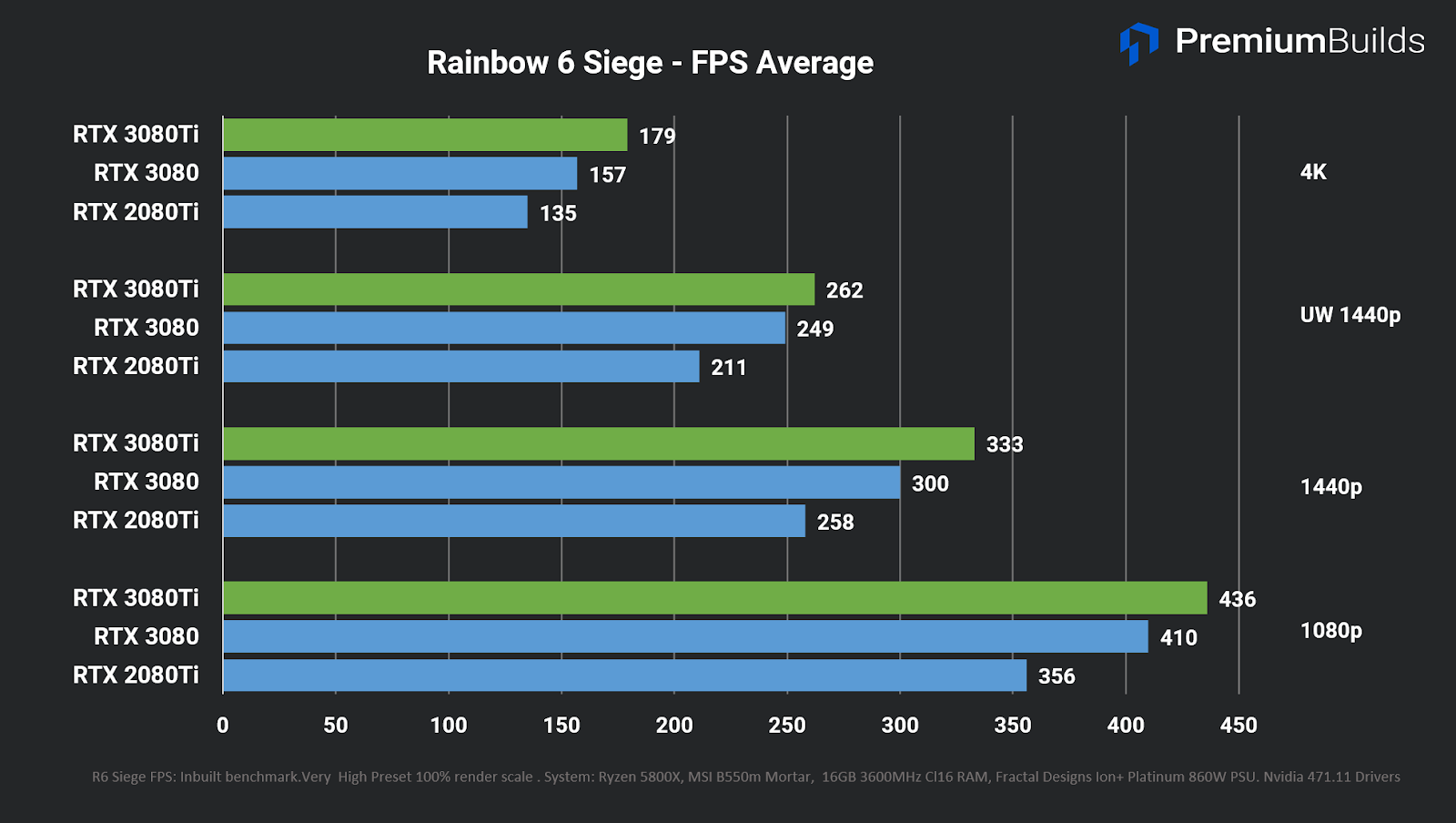 Moving on to the AAA titles in our test suite and looking at Red Dead Redemption 2, the RTX 3080 Ti again tops the charts but not by a huge amount. Just 10 FPS separates it from the RTX 3080 across the board, from 1080p to 4k. 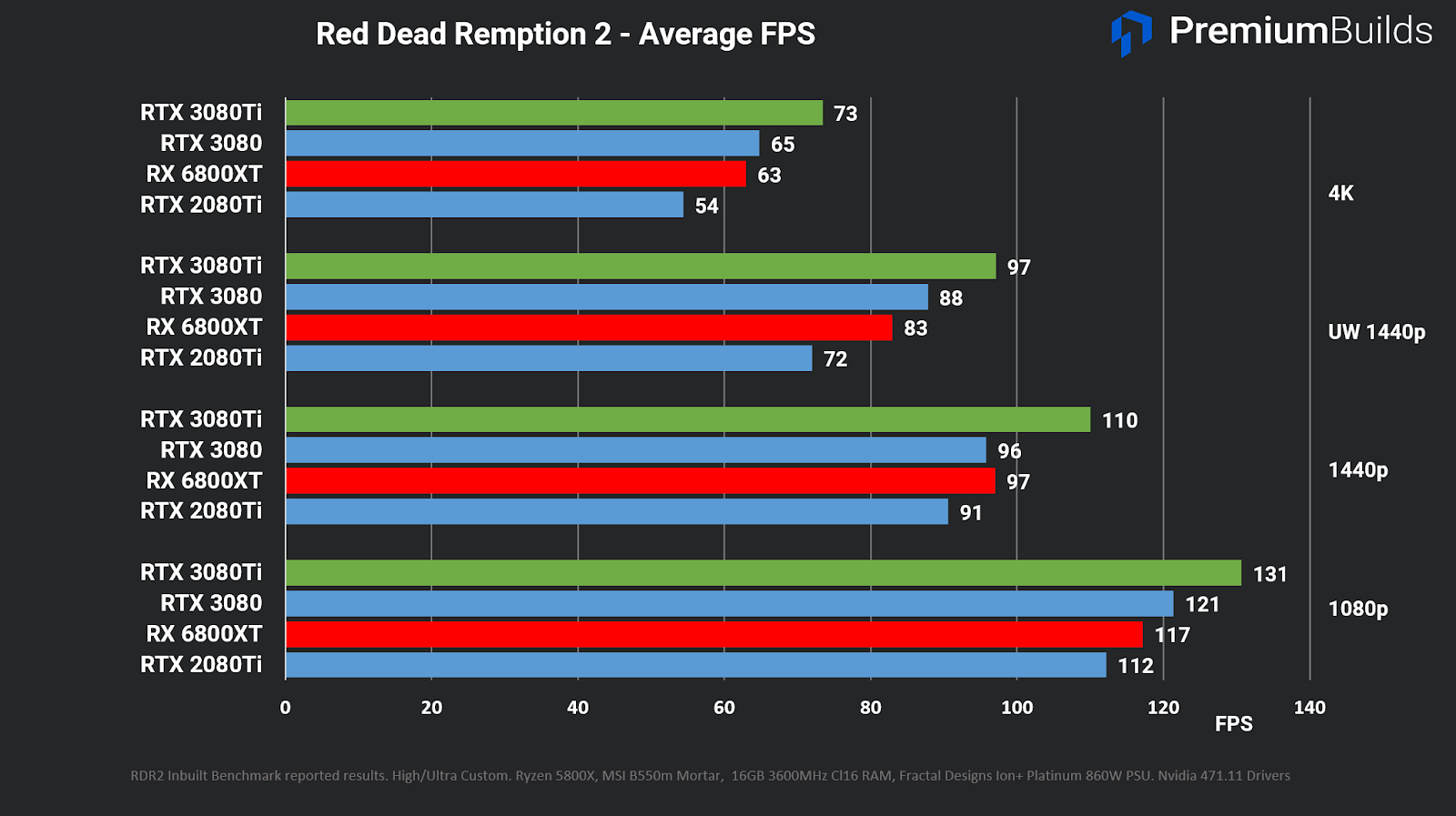 Shadow of the Tomb Raider

Shadow of the Tomb Raider has always shown good scaling with hardware and isn’t particularly CPU limited for the bulk of the benchmark run – although it is in the final village scene to provide a good overview of system performance. Here it’s no different, with a good 20% advantage over the RTX 3080, 40FPS faster at 1080p, twenty FPS at 1440p and 1440p ultrawide, and 17 FPS better at 4k. Those are fairly impressive steps up in isolation. 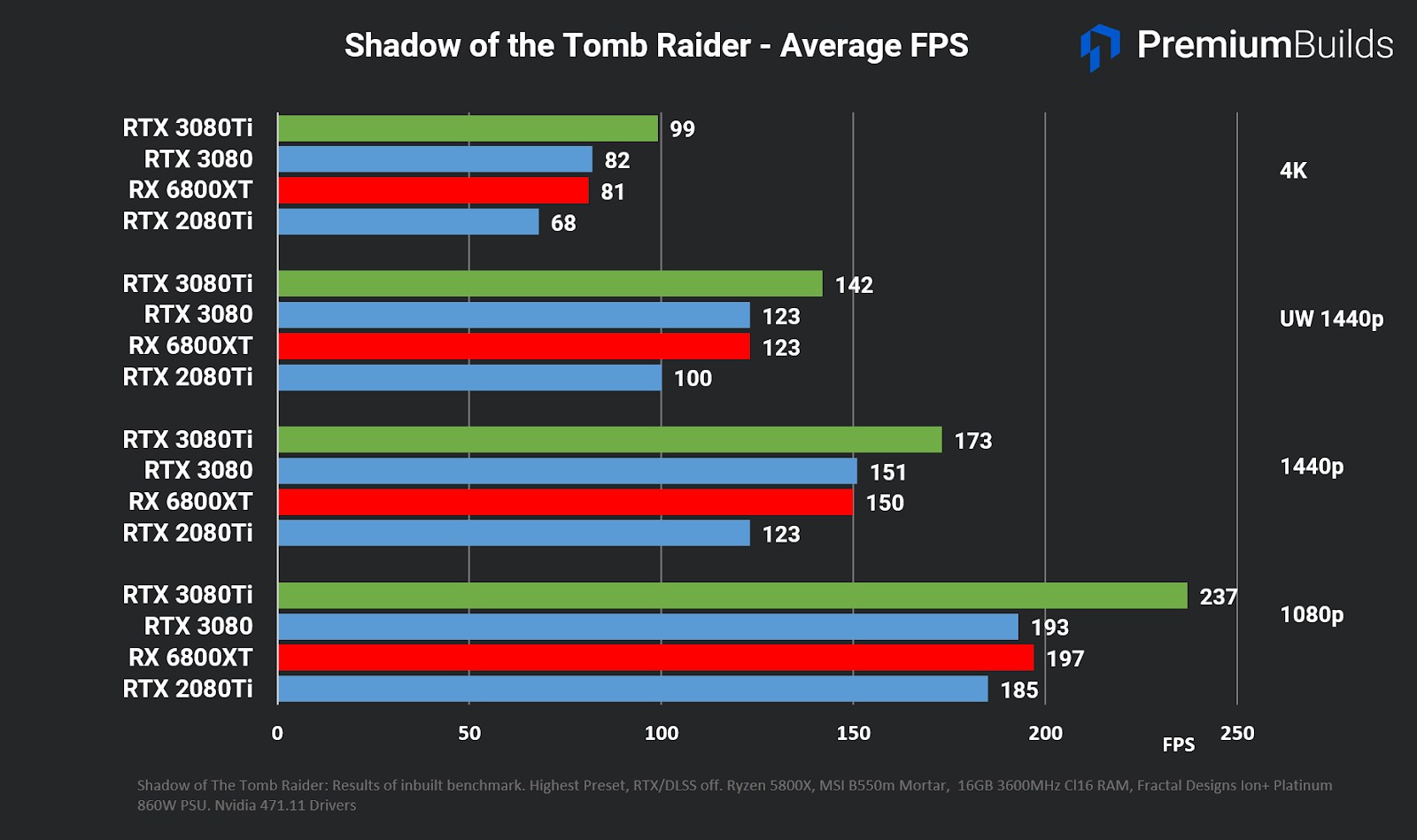 This demanding but gorgeous simulator delivers a cautionary tale. Our custom benchmark is designed to fully tax CPU and GPU with a low level 3 minute AI-controlled flight over Manhattan. We’ve shown results for both average performance and 1% lows here to better illustrate the results: This GPU is NOT the performance saviour for Flight Sim 2020. You can see that this game is CPU limited with all of these GPUs at 1080p, 1440p, and 1440p ultrawide. Only at 4K does the RTX 3080 Ti pull ahead, but even then it’s matched by the RTX 3080 and we’re STILL CPU limited to around 48FPS average. The long story cut short here is that despite reputations Flight sim actually isn’t GPU dependent: You need a top-flight CPU to make this game run well.

Looking at Ray tracing performance, This is more of a subjective assessment of the experience. That’s for a few reasons: First is the hand-and-glove nature of RTX and DLSS with the upsampling technology giving a massive boost to performance but also allows you to tweak settings to your preference of fidelity against frame rates. Secondly because of the fast-evolving nature of RTX implementations in games. Games like Control and Metro Exodus remastered really do show this feature off well, with naturalistic lighting and well-judged effects. We’ve been playing Metro Exodus remastered at 1440p ultrawide and RTX on, but no DLSS and play is fast, fluid and utterly gorgeous – but you’d hope that to be the case with a range-topping GPU. The long and short of it is that this GPU offers one of the best gaming experiences currently available utilising these technologies from Nvidia, and that’s as you’d expect.

Taking a quick look at temperatures and power draw: Running default settings and Logging metrics through a Time Spy run to give a load representative of Gaming, we see the 3080 Ti Draw around 390W to 400 Watts under load. Temperatures on this FTW3 card remain acceptable, with the core reaching around 75 Celcius, and The GDDR6X Memory junction temperatures at 86 Celcius. This is pretty good, under heavy load we can expect temperatures to reach 95C and GDDR6X will run as hot as 105C under continuous heavy loads or when airflow is restricted. Many owners resort to modifying their cards with thermal pads to transmit heat away from the VRAM and into the backplate. Overall, the power draw of this card in particular will demand a very capable power supply to run it, and you may want to investigate under volting it to keep power draw and temperatures lower as well. Particularly when comparing it to the RTX 3080, which draws around 340W, this card consumes around 20% more power for 10% or so more performance – not a great result comparatively speaking. A good quality 750W power supply should be considered a minimum for this Card, we did test it with a high-quality 650W Power supply, the Antec Earthwatts Gold, and it forced system shutdowns on a few occasions.

Conclusions: Can you justify the cost of the RTX 3080 Ti?

What we inevitably come to is the question of value: Is this GPU worth the $1,500 they’re currently retailing for? The answer is an unequivocal ‘No’. It’s simply impossible to justify the price of this GPU on performance grounds. You lose virtually nothing by opting for an RTX 3080 instead and lowering just a few settings for an equivalent experience. It has all the same features, capabilities, and it uses much less power. The trouble is of course RTX 3080’s aren’t readily available at anything close to MSRP. 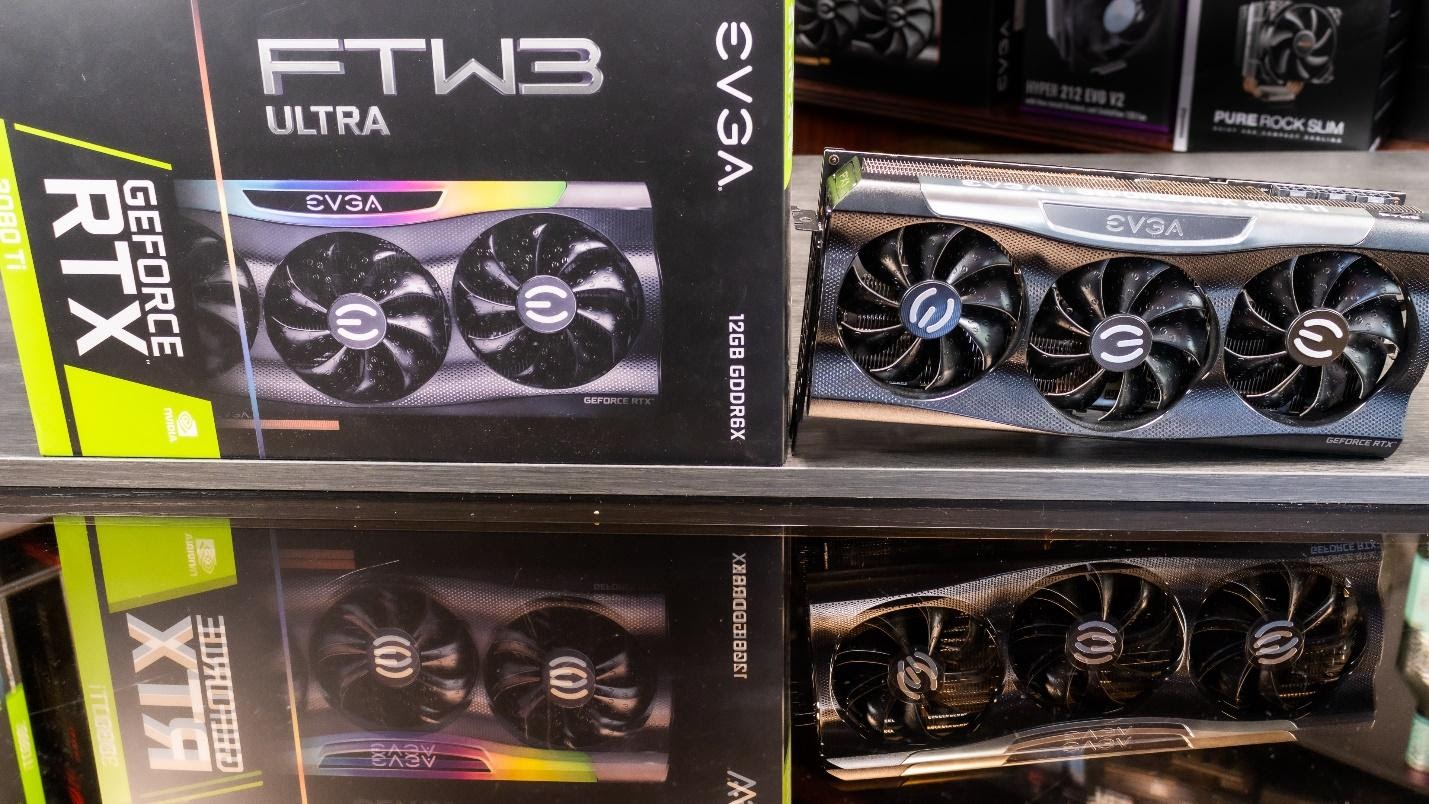 So we’re left with a couple of ways to look at this: First, you could criticise Nvidia for releasing a marginally better product at a substantially higher price – that happened with the RTX 2080Ti as well but they still sold well. This all stems from the first GPU shortage in 2017, when GTX 1080Ti’s were changing hands for well north of $1000. This set a precedent and sent clear signals that enthusiasts (or desperate gamers) would out-bid miners to get their hands on the current best in class GPUs. Nvidia stopped being shy about the four-figure threshold for their flagship GPUs. Some people see this as being ripped off, others that it’s just a function of market forces. The bad feeling originates from the fact that Nvidia are exploiting market conditions to elevate the price of this GPU by perhaps $200. Remember the cost of GDDR6X VRAM and how halving the quantity likely saves $100 or more in parts cost alone? That ‘saving’ clearly isn’t being handed on to the customer here.

You can also look at products like the RTX 3080 Ti as a luxury good: they clearly are. But like an expensive watch, car, or handbag the price isn’t justified in any way by the features of the product. They’re prestige items, as much about proving you can afford ‘the best’ as actually need the performance. When viewed like this objective metrics break down: No-one cares that the latest limited edition Porsche is just 0.1 seconds faster to 60 for an additional $50,000. They just want the fastest Porsche, and there will still be a waiting list to buy them.

How you feel about this is likely down to your own personal assessment of value. It’s absolutely gutting at the moment that products like this exist when there are no affordable options for gamers. If this card existed alongside $450 RTX 3060 Ti’s and $700 RTX 3080’s, it wouldn’t feel like such an egregious situation. It’s the fact that people feel compelled to spend this amount just to get a card that leaves a  hint of exploitation in the air. In short, you should only consider the RTX 3080 Ti if money literally isn’t a thing to you – in which case, presumably the RTX 3090 is also in reach. But that 24GB VRAM is still wasted on games.

I absolutely love the way this card performs in VR, in the most demanding titles, at high resolutions. I absolutely hate the price and the state of the market. Hopefully, the market will correct in time and we are seeing signs of that already. So unless you absolutely need a card of this calibre right now, my advice would be to wait – prices are only going to come down from here.